A downloadable game for Windows

"You'll have to run to travel cheaper", this once was an actual slogan of the SNCF, the French national railroad company.

In Mesdames Messieurs, you are the driver of a train which, like many train do, runs into troubles. You must avoid them as much as possible, but ultimately you'll get an accident, or some kind of issue. The game will ensure that.

Though it feels like the game restarts over and over, the passenger don't forget. As long as you play again, they get angrier and angrier, and come closer to your cabin! So, when the game over scene occurs, after you got an accident, take care of choosing the right message!

The game splits in two parts, namely driving then apologizing. Both plays with the keyboard.

The first part consists in driving the train, in a setting similar to Temple Run, Subway Surfer and the likes (oh we could've added a surfer crossing our way in the obstacles :D). Except, you don't explicitly drive the train, but you rather switch the rails using the keys specified in the signs present along the path (so more like Guitar Hero, kinda). Many switches are linked to the same key, so you have to stay careful!

So, you crashed. Or you missed the station. Or whichever other reason to make your passenger angry enough for the game over screen to pop up. Now you need to pick a message (arrow keys, enter) to transmit them in order to calm people down, among a small selection of procedurally generated sentences. While it seems at first like a detail, the proposed messages change as soon as you play the game!

All mouth made! Don't miss it, turn your speakers on!

This game was made during the Global Game Jam 2018, in Cergy, and we... hum missed the deadline for uploading, so we are not actually listed here. Still, the game published here is as it was at the end of the jam, a little less than 48h after starting!

We are 5 students in our first year at ATI - Paris 8 and this was our first public jam, for all of us! We'd like to thank our teacher btw, as well as the people at Cergy!

We had of course more ideas than we were able to implement during the 48h that the Global Game Jam lasts, so here are some features that have not been implemented but about which you may notice some left-overs.

You may have been talented enough to avoid the obstacles up to a train station (quite easy). You may have even repeated this exploit. And so you've seen it. Nothing happens with these stations. What we intended to do, is to request the player to break when reaching a station. But not too much, otherwise passenger would fall and get angrier. But break enough anyway not to miss the stop!

Our brainstorming was mostly inspired from top lists of real messages from the SNCF or the SNCB, which had us imagine many little scenarios. We implemented for example one in which the train leaves without the driver (the camera stops while the train keeps on moving), leading to a scripted apologize message.

We also imagined a signaling failure scenario (classic actual issue) in which the signs specifying which key to hit to switch the rails would fall and hence be hidden. And so on. We would have liked the user experience to be more focused on these little events than on the avoid-them-all gameplay.

You can chose between a couple of messages to transmit to your passengers but... how to say, it does not matter which one you pick actually. There is a growing absurdity in the messages as long as you play, though it does not grow so fast and in practice no nobody got to play long enough to notice it and see the craziest messages.

We would have liked to have more continuity, more links between successive plays, and that the actual game would be the interactive story made by the choices in the game over screens.

The driving game is definitely too easy. It is a procedural succession of hand made patterns whose difficulty increases, but which then loops down to the easy beginning, and one could play for ever without any trouble. Since the game consists in loosing the driving part, it should become quickly much more difficult, with many keys to press, etc. And eventually, there must be patterns that don't let any chance to the player but to hit something. Just to frustrate her. 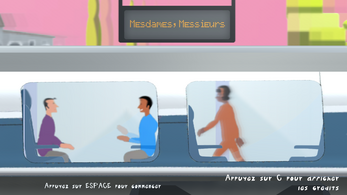 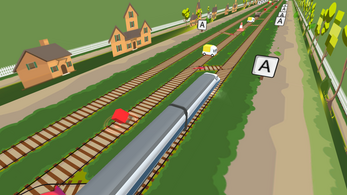 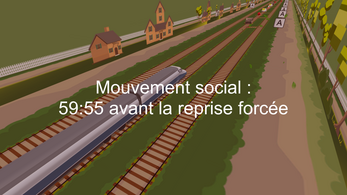 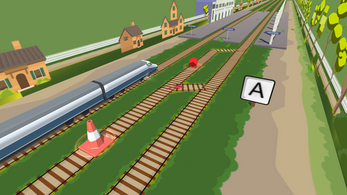 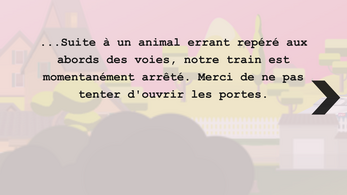 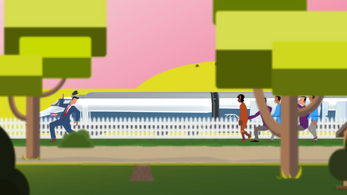